As the world’s leading ignition and vehicle electronics specialist, NGK SPARK PLUG’s reputation extends well beyond ignition components such as spark and glow plugs. Indeed, the company’s NTK Vehicle Electronics brand is the world’s largest supplier of Original Equipment oxygen sensors as well as a leader in the Aftermarket. Join us for the fifth instalment of our ‘You asked Google’ blog series where we provide expert answers to the most frequent questions asked about oxygen sensors!

1. What does an oxygen sensor do?

Also known as a ‘lambda sensor’ or an ‘O2 sensor’, an oxygen sensor ensures ideal conditions for the catalytic converter by providing constant measurement of the air-fuel ratio. The optimum air to fuel mixture for an internal combustion engine is one that has a ratio of 14.7kg air to 1kg fuel: This specific air-fuel combination is called the stoichiometric ratio, which corresponds to a value of lambda 1. This ratio, however, isn’t automatically guaranteed, which is the reason why oxygen sensors play such an important role.

2. How do oxygen sensors work?

Oxygen sensors measure the percentage of oxygen in the exhaust system and then report this information back to the vehicle’s engine control unit (ECU). Often, the air-fuel mixture is either too rich or too lean for the catalytic converter to do its job properly. If the mixture is too rich, the exhaust system contains not enough oxygen, while if the mixture is too lean, there is too much oxygen present. In both cases, ultimately, an efficient function of the catalyst is not possible. To counter this, the oxygen sensor relays its findings to the ECU which then adjusts the air-fuel mixture as close to lambda 1. This results in more efficient combustion, which not only benefits the environment by decreasing emissions, but also results in fuel savings and a reduction in engine wear and tear.

3. What causes an oxygen sensor to fail?

A bad or failing oxygen sensor can be due to many reasons. While an oxygen sensor needs to be replaced due to general deterioration over time, other avoidable factors can result in the need for premature replacement. These include the sensor coming into contact with fuel additives, silicon and carbon deposits.

4. What are the symptomes of a faulty oxygen sensor?

There are many symptoms to look out for, with the most obvious being that a ‘check engine’ light is activated on the car’s dashboard. Other indications include: rough idling and stalling, reduced fuel economy. 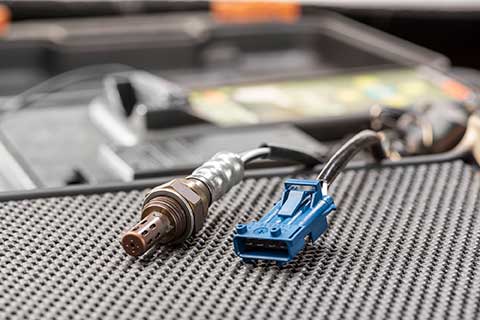 5. How many different types of oxygen sensors does NTK Vehicle Electronics offer?

6. Where ist the sensor located?

7. How do you replace an oxygen sensor?

The replacement of an oxygen sensor is a quick and simple procedure. Once the engine is cool and the vehicle is raised, the faulty sensor should be located and disconnected. An oxygen sensor socket should be used to loosen the sensor; it can then be fully removed by hand. Before screwing in the new sensor, it is recommended to apply anti-seize to the threads (if the threads are not already coated), making sure that none of it makes contact to the sensor itself. After this, the new sensor can be screwed in by hand and tightened to the correct torque specifications (18mm = 35-45 Nm and 12mm = 18-23 Nm) and reconnected. For more detailed information, please check the video.

8. What happens to the car if a bad oxygen sensor is not replaced?

This will mean that the ECU will not be able to set the correct air-fuel ratio. This will result in poorer fuel economy, high emissions and potential damage to other engine components or catalytic converters. Faulty sensors are identified by the ‘check engine’ light and should be replaced immediately.

9. How do you test an oxygen sensor?