“Trust in yourself, work hard and make it happen” – François Lemariey on how to manage a successful MXGP team

Is there a more thrilling sport than motocross (MX)? In the MXGP category, daredevil riders on 450cc four-strokes engines risk life and limb as they carve through the mud and soar through the air in a battle to reach the chequered flag first. Considering the extreme conditions in this sport, it is no surprise that NGK SPARK PLUG, the world’s leading ignition and sensor specialist, has a high involvement. As a technical partner and spark plug supplier to the Monster Energy Kawasaki Racing Team (KRT), we caught up with François Lemariey, the team’s young but highly experienced manager to gain some insights into his passion for the sport and the challenges of his job.

A career forged in childhood

Many people spend a lifetime, often without success, searching for their vocation. Some, however, like François Lemariey discover their true calling at a very early age. “I started to love MX as a young kid. I would visit my grandparents regularly on Sundays. Close to where they lived was a place where you could rent motorcycles, so I would spend the afternoon riding 50cc bikes. This, certainly, is where my passion for racing and motocross was first sparked,” he tells.

With his target career clearly defined, François secured a traineeship with the CLS Kawasaki team before he had even finished school. “I worked for CLS Kawasaki for three years and enjoyed many great experiences there.” His entrance into the world of professional motorsport led to many additional opportunities. “While working with CLS I spent the winters with the MD Rallye Sport Team. In my first year, which was the last Dakar raced in Africa, I worked as a motorbike mechanic and when the Dakar moved to South America for the first time, I became a co-driver of a fast assistance truck,” he informs. In 2009, François switched teams, joining the Belgium-based Honda LS. “I worked as a mechanic for Clement Desalle who enjoyed a successful year, finishing 3rd in the world championship. This was my first real test and it gave me a good experience. It got me noticed in the paddock,” he says.

Barely a year into his new job, his former boss Thierry Chizat-Suzzoni came calling with an offer he simply couldn’t refuse. “Thierry had taken over the Kawasaki Racing Team and offered me a new and, frankly, unexpected challenge; to become the team’s manager. It was not an easy decision, but I decided to take the plunge and the rest as they say is history. I’m now into my 11th year as team manager of KRT,” he proudly tells. And the recipe for his success? “Trust in yourself, work hard and make it happen!”

The challenges of managing an MXGP team

With a proud and successful history in the motocross world championship for more than a quarter of a century, KRT teamed up with the US drinks manufacturer Monster Energy in 2014. This has proven a successful collaboration, resulting in GP victories by France’s Gautier Paulin, America’s Ryan Villopoto and, since he joined the team in 2016, Belgium’s Clement Desalle.

According to François, the sport is barely recognisable to the one that existed a decade ago when he began his involvement. “Today, manufacturers are heavily involved in MXGP, which has led to ever-increasing levels of competition. To finish 3rd as Clement Desalle did in 2009 on what was pretty much a stock bike is just not possible anymore. Motocross has just become more and more professional.”

Although he has experienced many highs as a team manager – as evidenced by the numerous podium finishes and victories his riders have celebrated – disappointments are also part and parcel of the job. For François, injuries to riders cut especially deep. “This is the most challenging aspect of managing a team. All the good work that the rider, the staff and the partners who have invested in the team, can be destroyed in a second due to a crash, which can put the whole project in difficulty,” he tells.

To ensure optimum performance, François leaves no stone unturned to guarantee that his riders are in the best possible shape. “We work with KRT superbike support to help the riders get the maximum physical prep done during training and we have a team of physios to help the riders with recovery after competition and to accelerate the healing of small injuries,” he says.

This year, though, he has had to confront an altogether different challenge: Covid-19. “This has had a huge impact on the world, and that unfortunately includes our sport as well. It was great to get the season started on August 9th. It was not only important for all the teams’ financial health, but also for the riders and the industry as a whole,” he says. The global pandemic, however, did present him some unlikely benefits. “I was able to spend five weeks in a row in France with my wife and daughter, which I’ve never been able to do before so there have been some positives,” he tells. 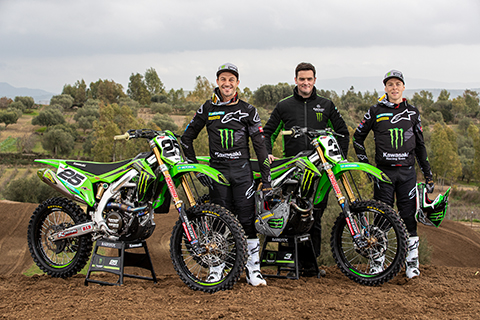 In spite of all he has achieved and the disruption which Covid-19 has caused this year, François' optimism for the sport burns as brightly as ever. He is particularly excited about his team which, this year, boasts a line-up consisting of Clement Desalle and Romain Febvre. “Having two top riders on board is something that I’m very proud of. The target is to get the best out of our bikes and racers in order to win the MXGP world championship,” he says.

Being in contention for world championships, however, wouldn’t be possible without the support of the team’s partners and sponsors, which include Kawasaki Japan, Monster Energy, Alpinestars, Motorex and others. The world’s leading ignition and sensor specialist is playing an equally important role for his team. “NGK SPARK PLUG simply make the best spark plugs, which is why our team is happy to rely on them. KRT and NGK SPARK PLUG have a lot in common. We are both constantly looking for the best performance and reliability,” he says.

“At NGK SPARK PLUG, we are delighted to be collaborating with François Lemariey and his team,” says Nicole Rößler, Head of Regional Communications & Aftermarket MarCom EMEA at NGK SPARK PLUG EUROPE GmbH. “We are passionate about developing the optimum ignition parts to fit the needs of every fuel powered engine, which is why motocross, with its extreme conditions, plays such a vital role for us. It’s quite apparent that the Monster Energy Kawasaki Racing Team is the perfect partner for our company.”