Meet Kim Irmgartz, the multitalented professional motocross (MX) rider and instructor who just so also happens to be a policewoman, a podcast host, a movie stunt double, a Social Media influencer and a Miss Germany 2020 contestant. Now we can add NGK SPARK PLUG brand ambassador to her impressive list of titles! The world’s leading ignition and sensor specialist recently caught up with her to learn a little more about her intriguing life. 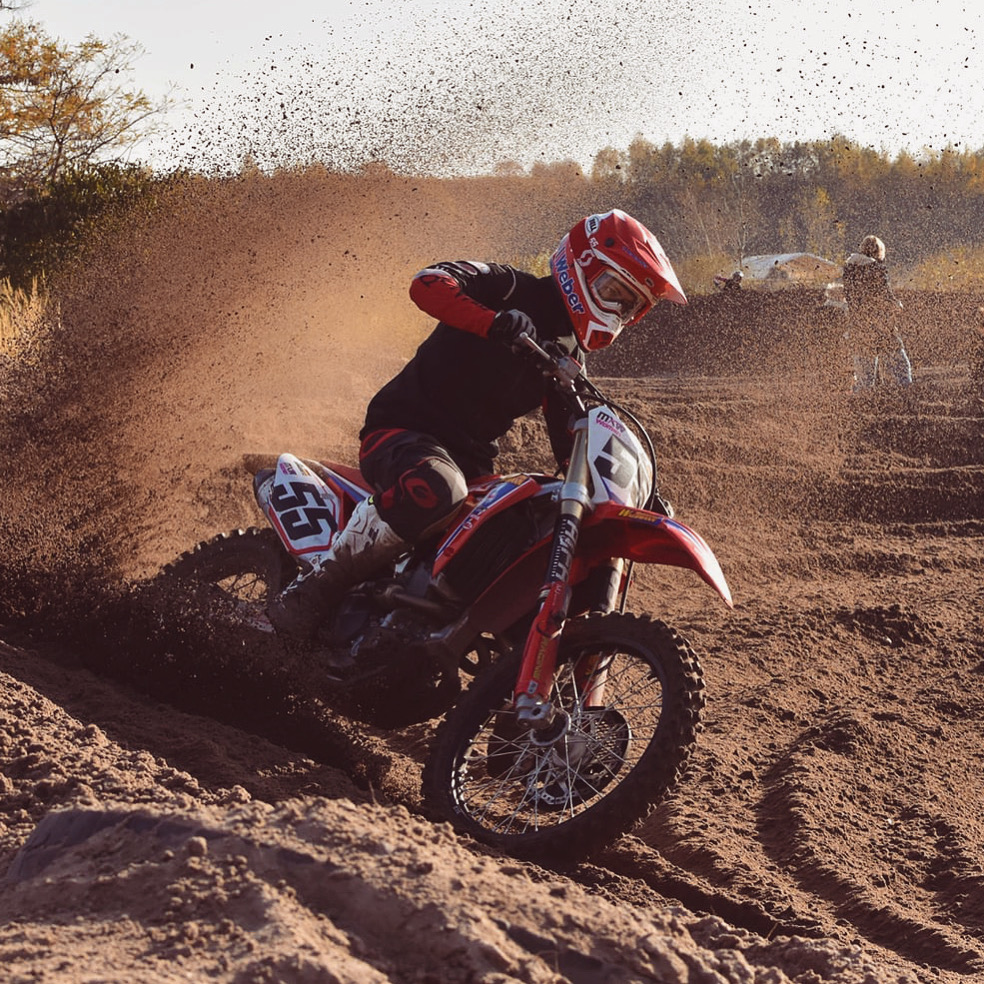 A lifelong passion
Although Kim is involved in many different activities, motocross is easily her top priority. This, indeed, is not very surprising to hear since she’s been involved in the sport for almost all of her life. “I first came to motocross when I was five years old,” she tells. “My brother started riding which meant my family was trackside nearly every weekend. It didn’t take long till I wanted to give it a go myself. By the age of six, I had already competed in my first race.”

Thus, began a passion for the sport that burns bright to this day. “Motocross is a tough sport for both body and mind. The line changes almost every lap so you have to stay focused all of the time. You fight with almost 40 riders and it’s the best feeling in the world,” she enthuses.
Given the lack of female participation in the sport at underage levels, Kim had to compete against boys at regional events until she was 14. When she finally was old enough to compete in the women’s only category, she soon showed her talent, qualifying to compete in both the German and World Championships.
A runner-up in the 2018 and 2019 DMV Ladies Cup, the highlight of her career was a fifth-place finish in the 2016 Women’s World Championship in the Netherlands. “This race was particularly pleasing because I broke both of my wrists in 2014 and a lot of people told me then that it would be a good time to stop riding, but I came back even stronger than before,” she proudly states. 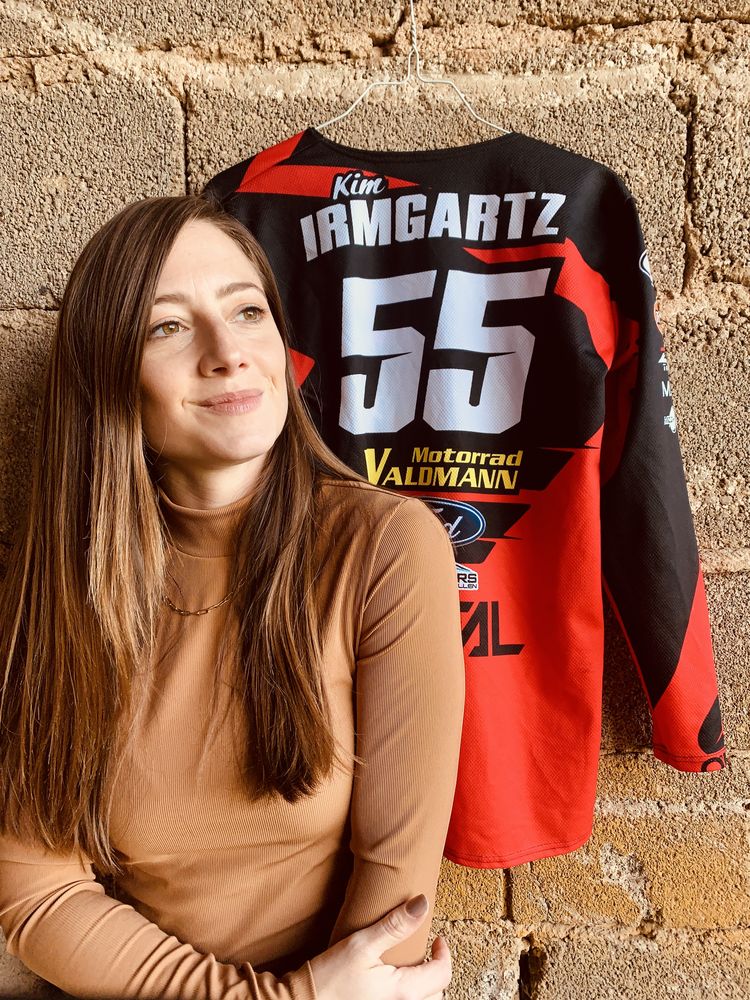 Despite her passion for motocross, she still manages to fit in many other activities into her life. Chief among these is her occupation as a policewoman. “I work near Cologne. At the moment, I’m not on active patrol duty. Instead, I’m a teacher at the police school for new students. Luckily, my employers are very supportive of my motocross career, which enables me to go to races,” she informs.
For most regular people, balancing a job as a motocross rider and one as a policewoman would be more than enough but for Kim, it is just the tip of the iceberg. Be it as a participant in beauty pageants, a film and TV stunt double or as a podcast host, it would seem that there is no activity too exotic for the NGK SPARK PLUG brand ambassador.

While her podcast mostly focuses on matters related to motocross, her talent for riding has also led to opportunities on the silver screen. “I have worked as a stunt double in the Amazon Prime Video series, ‘You Are Wanted’, the cinema film ‘Robbi, Tobbi und das Fliewatüüt’ and some other German movies,” she tells, adding that “it sounds more spectacular than it actually is because in most of the scenes, you are just riding a bike from A to B because most actors are either unable to or are uninsured.”
In 2020, Kim was voted Miss Nordrhein-Westfalen, which enabled her to enter the Miss Germany 2020 competition. With ‘authentic, empowering woman’ chosen as the theme that year, an individual like Kim perfectly illustrated the more contemporary direction which the competition has recently gone in. “You don’t have to think of it as a traditional beauty contest,” Kim confirms. “My message was that you can achieve anything when you believe strongly in yourself and work hard. It was a great experience, and I learned a lot about many things including Social Media, self-branding, self-confidence and much more,” she says. 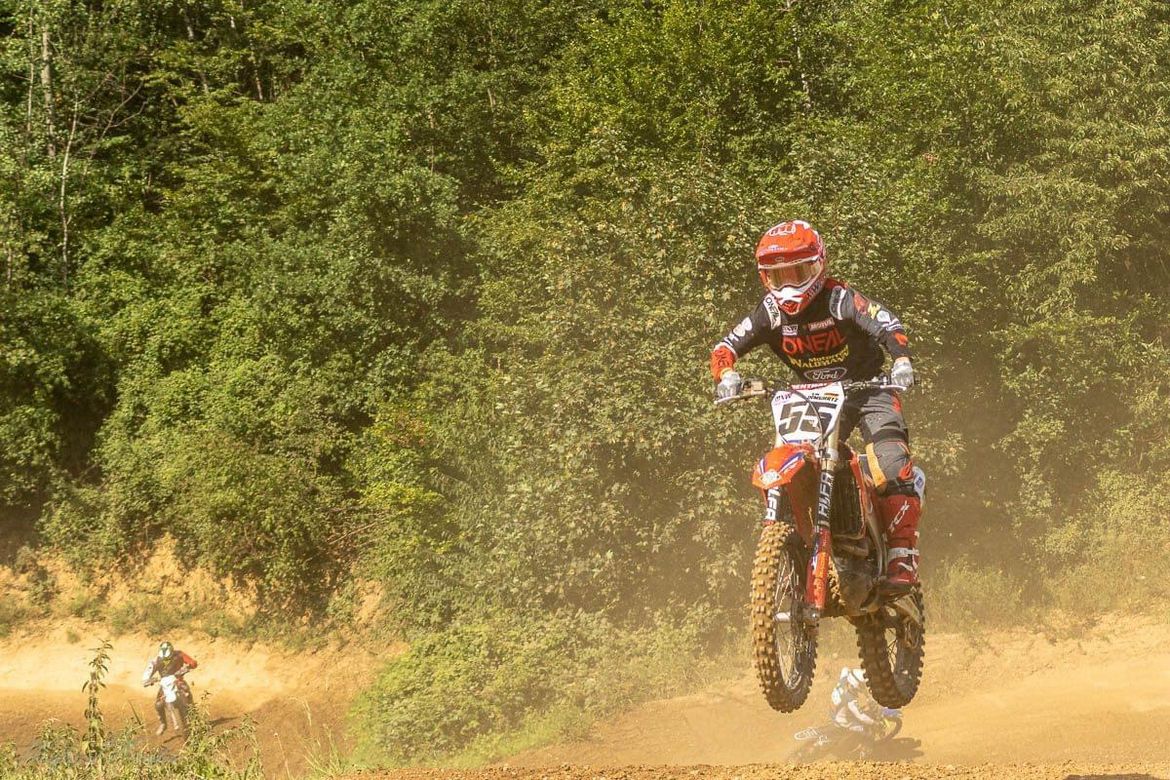 One matter very close to her heart is that of female participation in the sport that she loves. As honorary athletes’ representative to the German Motor Sport Federation (DMSB) as well as a licenced racing instructor, Kim is keen to do all she can to increase female involvement in the motocross.
“For me, it’s really important to show the girls that they can be successful in the sport, even if this means that they go alone to training because the more women we get into racing, the bigger the talent pool gets,” she says. Things, however, have come a long way since she first got involved in the motocross. “There has been a big increase in female participation. When I started, I knew only two other girls involved but today you can go to the track and find at least one girl taking part in every age class, not to mention that there are now specific girl-only classes,” she informs.
While the pandemic had a major impact on the 2020 season, Kim was still very busy with her day job, Social Media activities and hobbies which include baking and fitness, not to mention taking care of her adorable dog ‘Zazu’. Still, she has high hopes for 2021. “At the moment, the season is scheduled to start in July and with some luck, it should almost be back to normal,” she says.

One new development which she is particularly excited about is her partnership with NGK SPARK PLUG. “Both of my Hondas (CRF250 R) are equipped with spark plugs from the specialist. For me, they are the best products on the market because my bikes work perfectly with them and I always have a lot of power on point,” she reveals. When asked what she feels she has in common with the company, she says: “We are both strong and without either of us, the bike wouldn’t work!”

As for the future, Kim is happy to continue making the most out of life. “At the moment, I want to ride the WMX World Motocross Championship and compete against the best girls in the world. I also want to stay healthy and enjoy my life.”
NGK SPARK PLUG wishes Kim Irmgartz all the best in the upcoming 2021 season.