The loud music stops and the crowd goes quiet in anticipation of the duel. The referee shouts: “Stand to your timber!” and the spectacle begins. Two hulking men pick up and ignite their hot saws, large custom-made chainsaws powered by motorcycle or jet ski engines. In the blink of an eye, it’s all over. The noise of screaming engines is replaced by that of cheering fans, as the sawdust settles. On the ground before each contestant lay three large, thin, disc-shaped pieces of wood called ‘cookies’, freshly severed from a log. The athlete who has done this the quickest wins the ‘Hot Saw’ contest, one of six different wood chopping disciplines that make up STIHL TIMBERSPORTS®.

Competitive woodchopping is exciting and growing in popularity. Although it may seem like a novelty, it is in fact nothing new, with the first event dating back to 1891 in Tasmania and the Lumberjack World Championships taking place every year in Wisconsin, US since 1960.

For six-time German national champion and NGK SPARK PLUG brand ambassador Robert Ebner, chopping wood is a way of life. Like many STIHL TIMBERSPORTS® athletes, Robert got involved in competitive woodchopping through his day job. A forest master by trade, he decided to take wood cutting to the next level. “I participated in the German Forest Championships and there talent scouts noticed me,” he says.

Known around the world by a variety of names such as ‘woodchopping’, ‘lumberjack sports’ or ‘logging sports’, the potent mixture of tradition, being able to work with wood and cutting tools, as well as the competitive elements of STIHL TIMBERSPORTS®, proved too hard to resist for Robert. “For me, the special thing about this sport is, that it has its origins in old forest work. Aside from being able to work with wood, I especially enjoy the man-against-man aspect of the sport,” he says. 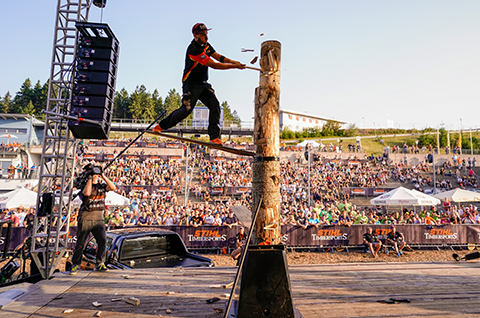 No axe to grind

Robert may enjoy the competitive nature of the sport but has nothing but respect for other athletes and doesn’t see the point in getting caught up in rivalries. “There is a family-like atmosphere among the athletes. Beating other contenders is not what motivates me,” he says. “Competing, to me, means giving my best. If I can do this, I am always satisfied,” he informs.

Giving one’s best is no easy feat, however, considering how physically demanding the sport can be. This is perhaps best encapsulated by the former Champions Trophy, now World Trophy competition, which involves a lot of wood, sweat and tears. With a current world record of 57.59 seconds set by Brad Delosa in 2015, athletes have to complete four disciplines back-to-back: Stock Saw, Underhand Chop, Single Buck, Standing Block Chop, with fastest athlete from each match-up progressing to the next round and ultimately the final.

Robert finished 5th in this competition in 2019. Arguably the most difficult, a variety of skills, strength and cardio fitness is needed to succeed. According to Robert, what is required to excel at competitions  is a focus on all of the important aspects. “You need strength, good technique, agility and flexibility. You also need to be able to adapt to each piece of wood, since each one is different,” he says.

To keep match fit, his routine involves a mixture of fitness, technique and direct on-wood training. “I practice three to six times a week. I do strength training at the gym, and axe, saw and chainsaw training at a friend's farm or over the border in Schirrhein in France,” he tells. 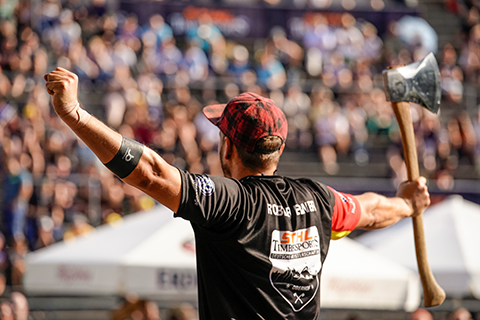 A collaboration of success