The SL has been around since 1952 and with 2022 marking the 70th anniversary of the model, it only seems appropriate for Mercedes-Benz to launch its seventh generation of the vehicle. Codenamed the R232, the latest SL – which in German stands for ‘super-leicht’ (‘super-light’) – will hit the road next year and promises to be the best SL yet. To celebrate the occasion, let’s look back at the SL’s previous six generations and discover how it has come to be such an iconic car.

Originally built as a race car in 1952, the W198 300 SL was never planned to be a road car. However, in 1954 after some extensive modifications to the body of the W194 racer, the first production model was introduced. Featuring its trademark gullwing doors, the coupé was powered by a 3.0-litre inline-six engine mated to a four-speed manual gearbox that powered the rear wheels. At the time, the ‘Gullwing’ had a top speed of 163mph, making it the fastest production car available.

Succeeded by a roadster version in 1957, the first generation SL is considered by many to be the no. 1 sports car of the 20th century, and has had many notable owners including Pablo Picasso, Sophia Loren, Paul Newman and Bernie Ecclestone. Considering that both original versions rolled off the assembly line in low numbers – 1,400 units for the coupé (1954-1957) and 1,858 units for the roadster (1957-1963) – both variants have become real collector’s items. Indeed, average prices today range well over the €1 million mark. 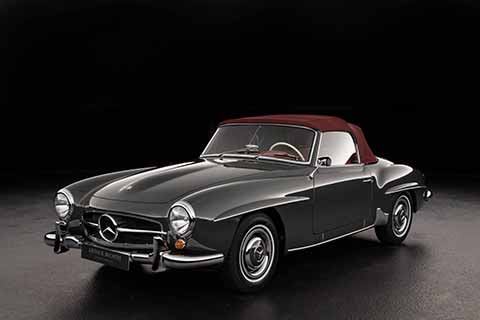 Introduced in 1963 at the Geneva Motor Show, the W113 Mercedes-Benz SL was also available in both a roadster and coupe body style. Much like its predecessor, the car quickly became a prized asset, and was driven by the likes of John Lennon, John Travolta and Priscella Presley, who received the car as a gift from the King, himself!

Featuring many innovations, all models of the W113 were fitted with an inline-six engine and had three engine size options: a 2.3-litre, a 2.5-litre and a range topping 2.8-litre. As well as the coupé and roadster versions, Mercedes-Benz also introduced a 2+2 model called the ‘California Coupé’.

Power was also increased from the previous model with the entry-level 2.3-litre car and mid-range 2.5-litre car producing 148hp, whilst the top-of-the-range car had an output of 168hp. Much like the original ‘Gullwing’, this car too had a distinctive look of its own, which included a concave roofline, providing the car its “Pagoda” nickname. 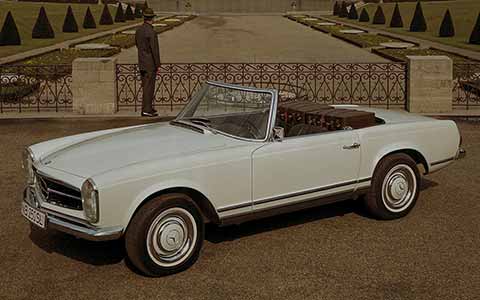 A lot like the previous models, the R107 was ground-breaking in its design, and it certainly stood out from the crowd. By this time the SL had cemented itself as a truly desirable luxury vehicle from the German manufacturer, with one of the marques owners being none other than Bob Marley. 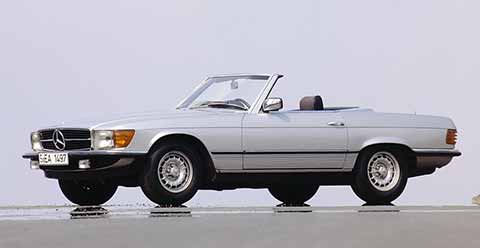 Heading into the 90s, the next generation of Mercedes-Benz SL underwent its biggest transformation yet. The soft-rounded lines of the body were replaced with straight lines and more square headlights, while the chrome trims of previous models were discarded in favour of a more minimalistic look.

Like the third generation, there were now many more engine options available throughout the R129’s 12-year run. The edition ranged from a 2.8-litre inline-six all the way up to a very limited production AMG variant with a 7.3-litre V12, which would later be used to power the incredible Pagani Zonda supercar.

The R129 was another car often seen being piloted by various famous actors and musicians, but the most controversial story of celebratory ownership goes to Diana, Princess of Wales, who replaced her Jaguar XJS-C with a metallic red 500 SL in 1991. This was the first time a member of the Royal Family had used a foreign car and due to much media scrutiny, she returned the car to Mercedes-Benz in 1992. 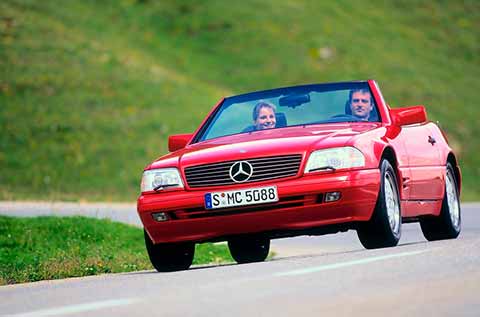 The fifth generation SL, known as the R230, was by far the most advanced SL ever created. During its design stage, state-of-the-art super computer technology was used in line with more traditional scaled clay models. The new SL also featured a fully integrated Infotainment system with satellite navigation, while high-specification vehicles came with Mercedes-Benz’s new Active Body Control (ABC) suspension.

The R230 range included a new choice of AMG variants, such as the 5.4-litre supercharged V8 in the SL55 that produced 510bhp, a car which famous motoring journalist and TV presenter Jeremy Clarkson bought, as well as a range-topping 6.0-litre twin-turbocharged V12 named the SL65. The SL65 produced an incredible 604bhp and 1,000NM of torque, making it one of the most powerful production engines in the world. 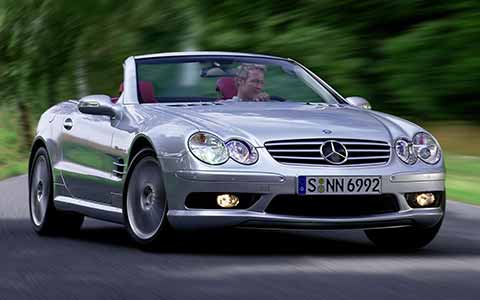 Released in 2012, the R231 Mercedes-Benz SL was the first SL to be produced with an all-aluminium spaceframe that, despite being longer and wider than the previous R230, was 140kg lighter. This weight reduction not only helped with performance and driver dynamics, but also paired with new and more efficient engines to create a more economical car. The new 4.7-litre V8 engine in the SL500 was twin-turbocharged and produced 429bhp as well as returning a much improved average of 31 miles per every 4,5 litres consumed.

The R231 followed on from its predecessors by leading the way in innovation and technology. It was full to the brim with the latest safety features and new gadgets including ‘Neck-Pro’ crash-responsive head restraints that would automatically move to protect the occupants’ neck in the event of a collision. Other safety features included ‘Attention Assist’, ‘Collision Prevention Assist’ and ‘Active Lane Keeping Assist’. 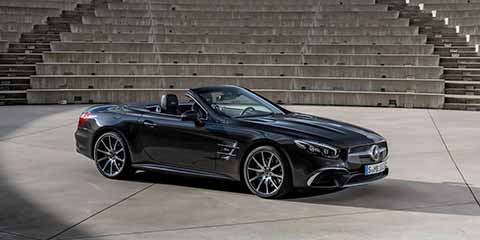 The latest R232 represents several departures from the previous SL-Class predecessors and a parting from the more traditional Mercedes-Benz brand. The new R232 has been marketed under the more exclusive Mercedes-AMG branding, making it the first SL-Class to be sold solely as an AMG variant, replacing AMG’s current GT Roadster in the process.

The R232 SL-Class will also be the first example of the roadster to use AMG’s 4MATIC+ all-wheel-drive system and rear-axle steering. All these changes will equate to a lighter, more efficient, dynamic and involving car.

The newest and latest Mercedes-AMG SL-Class is due to hit the road in 2022 and for sure it will be as iconic and impressive as its predecessors and hopefully, its new Mercedes-AMG branding will only improve the car’s desirability and lead to more impressive performance innovation in generations to come.