Your car, your story – Part 6: Two Porsches are better than one!

Over the course of the past year, our ‘Your car, your story’ blog series has featured an array of classic vehicles owned and maintained by employees of NGK SPARK PLUG in the EMEA region. Now it’s time to take a trip south to meet an employee of the ignition and sensor specialist, whose special story involves not one, but two Porsches! Join us as we begin the sixth instalment of the blog series about the vehicles our employees love.

For Jose Manuel Jurado Cabello, Technical Service Manager & Area Sales Manager Aftermarket Iberia at NGK SPARK PLUG EUROPE GmbH, cars have been a life-long passion. “I have loved cars since I was a kid and maybe that’s the reason why I studied mechanical engineering,” he tells.

It was sports cars, however, that made an indelible mark on him. “I loved their sound, shape, power, the way of driving them. Therefore, the first cars that I owned as a young adult were always sports compacts or hatchbacks such as the Opel Corsa GSI, the Volkswagen Golf GTI 16V and the Opel Calibra 16V.”

An epiphany in 2012, abruptly altered his thinking on the distant future. “After overcoming a health scare, I thought, ‘you only live once’ and decided to buy my first youngtimer, an old Mazda MX5,” he says. The best-selling two-seat convertible sports car in history, the MX5 was the right car at the right time for Jose: “It was a really fun car on mountain roads and was a car that provided me with my first experience of car clubs,” he says.

His next car, however, didn’t just look like a Porsche, it was the real thing. “I sold my MX5 in 2015 because I wanted something more powerful, and one month later, bought my Porsche Boxster S (986) or ‘el azul’ (‘the blue one’), a 2002 model that I got from a nice old Dutchman who was living on the Costa del Sol. He was the first owner,” he informs. 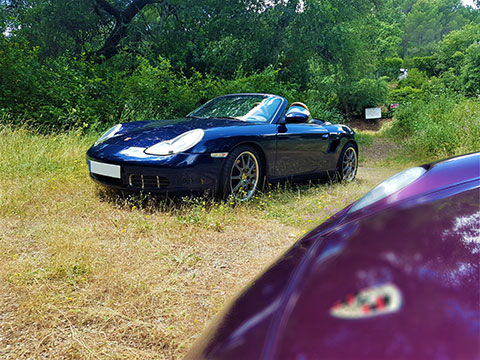 Opportunity knocked, and Jose had grabbed it with both hands. “The last few years have proven to be the best time to buy a Boxster S (986). Their current price is quite low and some even still belong to their very first owners.” The car itself, according to Jose, has many technical characteristics that make it very effective and exciting, which include a 3.2 litre flat-six engine situated in a central position, a sport gearbox with 6 speeds, perfect mass distribution, self-locking differential, sport suspension, VarioCAM and 252 horsepower.

“The only problem for a family man like myself is that it only has two seats,” he tells. At a Porsche weekend meeting, however, Jose’s wife opened his eyes to the possibility of adding to his collection.

“She said: ‘With a four-seater, we could bring the whole family. Why don’t you think about getting one?’” he fondly remembers. Jose didn’t need to be asked twice, and his search soon unearthed one particularly interesting offer.

“I chanced upon an unusual advert for a Porsche 968 coupe, at a really interesting price,” he tells. He was astonished by his fortunate discovery. “It was a genuine and rare Porsche 968 convertible in very good condition. A retired English banker had owned it for the past 17 years. He was able to give me a complete paper trail of the car’s history. ‘El otro’ (‘the other one’) came into my possession that very day.”

Porsche only manufactured 4300 units of the 968 Cabrio; exporting 2000 to the USA, meaning it is quite rare in Europe today. “It is a classic concept sports car, with front-engine and rear-wheel-drive. The gearbox is on the rear axle, making it very balanced. It was the final evolution of the sports car that began as the Porsche 944 and it has the biggest 4-cylinder, 3000cc engine mounted on a production car. It also is painted in a very beautiful and exclusive ‘metallic amethyst’. This colour is very rare, meaning it is quite possible that my model is the only one in this colour in Spain,” he proudly states.

While owning a classic or vintage car is indeed a satisfying endeavour, Jose is keen to emphasise the many pitfalls that people should consider before buying one. “Without some sort of a background in car mechanics, your hobby will get very expensive,” he warns. The type of model is also very important, he points out, because “replacement parts for rare vehicles are not always easy to come by and can be quite expensive.”

Mechanical or paint-related repairs are other important factors, he stresses. “Take a very cautious approach to rusty cars or ones that have been repaired after a crash and beware of bargains,” he continues. In addition, he would recommend buying from the original owner if possible, because these types of cars are usually well-kept”.

With his background, Jose is well-equipped to give his Porsches the required care they need. “I do all the maintenance myself. I only take them to the specialist for complicated repairs, where special tools that I don’t have are needed.”

An employee at NGK SPARK PLUG since 2003, Jose is naturally well aware of the ignition and sensor specialist’s high quality. “I fitted the Boxster with the recommended reference BKR6EQUP five years ago and have had quality performance since then. Last February, I fitted the reference BPR6EIX on the 968. These are iridium spark plugs that perform an extremely smooth ignition,” he tells. 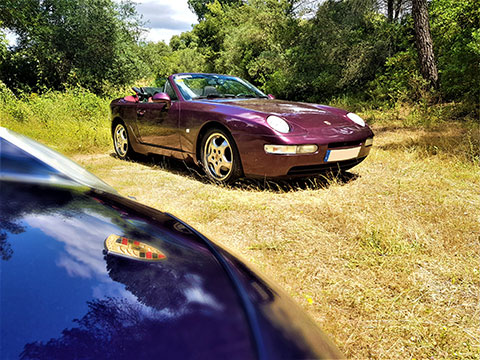 A hobby in progress

Although both of his Porsches are, as he calls them, “a constant work in progress”, this is more due to the enjoyment he gets out of working on them. “You could say that I have fuel in my blood! When I’m working on my cars, time stops and worries disappear. It’s a very rewarding feeling when the engine starts again after some maintenance,” he says.

Luckily for Jose, his friends and family are very supportive of his hobby. Moreover, apart from during a few months in summer where he drives them less frequently, Jose gets full use out of his sports cars. “I try to drive my Porsches every time I get the chance. Whether the journey is short or long, being able to drive these cars puts a smile on my face.”

Next up in our blog series will be the Mercedes Benz 260 E.

Your car, your story – Part 3 The Renault Dauphine: The prettiest little four-seater in the world - August 2020