Andy Assmann: Carving out a living as a chainsaw artist

Pencils and paintbrushes may be some of the most common utensils used for the creation of art, but as chainsaw carver Andy Assmann proves, art can be made in many different and unique ways. Join us as we get to know NGK SPARK PLUG’s latest brand ambassador a little better.

Born and raised in the Hunsrück in Germany, the 30-year-old Andy was introduced to chainsaw carving while doing a forestry apprenticeship in 2008. “A fellow colleague was the first person to give me a demonstration of this type of art,” he says. “He is still involved in chainsaw carving to this very day, but I have since overtaken him in terms of ability!” he jokes.

The young Andy took to chainsaw carving quickly, excelling to such a degree that he began to enter competitions in 2016. “I participated in events in England and Germany where my team won the top prize,” he informs. “It was then when I began to believe that it could become more than just a fun hobby.” His dream would ultimately come to fruition a couple of years later in 2018 when he quit his job as a forester to focus solely on art creation.

One of Andy’s heroes is Simon O’Rourke, the English chainsaw artist who gained world-wide attention a few years ago after his ‘Giant Hand of Vyrnwy’ sculpture went viral on the internet. This particular piece of art rescued the once tallest tree in Wales, which had been damaged in a storm, and transformed it into a giant outstretched hand reaching into the sky. Andy believes his work tries to do something similar. “My motto is ‘wood coming alive’,” he tells. “The philosophy of my work concerns bringing tree trunks back to life by turning them into something eternal like art.” 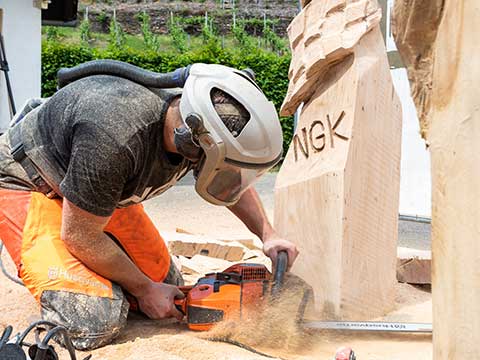 Andy is extremely versatile in terms of the sculptures he carves, which the NGK SPARK PLUG employees at the company’s EMEA headquarters in Ratingen, Germany have got to discover first hand. “I have been present at some company events recently and have been given the opportunity to demonstrate my skills. On one occasion, I even carved a wooden spark plug,” he reveals.

The time it takes to complete a sculpture can range between five minutes and four days, and he considers oak the best raw material to work with. “Oak looks great,” he says. “It is very durable in terms of weather as well as being very easy to work with.”

It is the sculpting of animals, however, where he believes he particularly excels. “The carving I am most proud of is one I made of a bull, which is very detailed and proportional,” he informs. “This may soon be even surpassed by a life-size carving of a horse which I am currently finishing,” he adds. 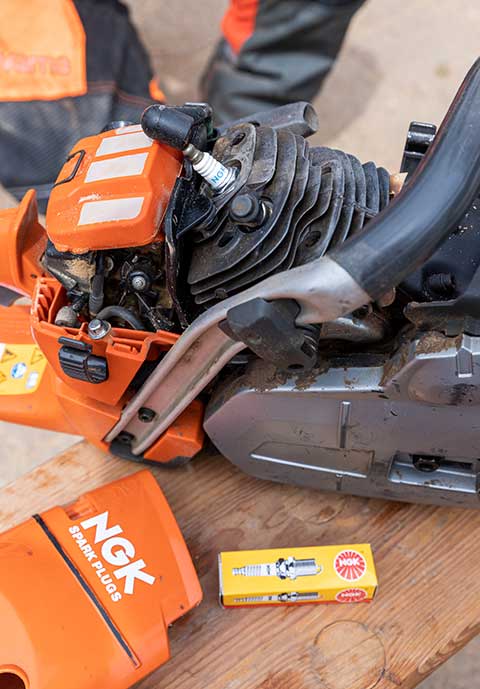 A career on the rise

Andy relies on the manufacturer Husqvarna for chainsaws, of which he has 14 different types. Given its role in the efficient functioning of a chainsaw, he is also eager to recognise the importance of the spark plug. “Without spark plugs, I wouldn’t be able to carve very quickly!”

With this in mind, his recent partnership with the world’s leading ignition and sensor specialist is something which he believes suits both parties perfectly.

“The company’s spark plugs are the best on the market,” he says. “I use the reference 560xp which in my opinion provides the quickest and most robust performance available.”

Since taking up chainsaw carving fulltime, Andy has been able to pursue his passion for travelling, displaying his chainsaw skills in destinations such as Austria, Hungary and Canada. His talent, moreover, is being increasingly recognised with works of his being put on display in high-profile places such as the German Bundestag in Berlin.

With the support of NGK SPARK PLUG, his profile looks set to continue increasing. “I have high hopes for the future,” he tells. “I wish to be able to continue improving my wood carving technique so that my overall performance gets better. On top of that, I just hope that I can carry on travelling to more interesting places and meeting more great people.”