At NGK SPARK PLUG, we are very proud of our involvement at the pinnacle of professional sport, which is demonstrated by the fact that many world-class athletes are happy to rely on our ignition and sensor technology. One such sportsman is Lee Stone, the multiple freestyle jet sport world champion and new NGK SPARK PLUG brand ambassador, who discusses the many successes and setbacks he’s experienced in his career to date.

Just like the majority of world champion athletes, Lee Stone’s voyage to the peak of the sport of freestyle jet sport was forged in early childhood when, back in 1995, his parents purchased a Jet Ski. “I was four when I first got up on a Jet Ski and was instantly fascinated by it,” he tells.

Having taken to jet skiing like a duck to water, Lee quickly mastered the basics and by the age of seven, had already entered the freestyle category of the sport. “What I have loved from day one about freestyle jet sport is that it always allows me to push myself to learn new tricks every single time that I ride,” he explains.

Totally consumed by the sport and demonstrating clear potential, Lee’s parents invested in a Yamaha 701 SuperJet and at the age of ten, the young prodigy entered his very first competition at the British Championship. He followed this up by winning at the British Junior Championship and only a year after that, he secured an overall second place at the European Championship. The future, to be sure, was looking very bright indeed.

On the competitive freestyle jet sport scene, people started to take notice. Chief among these was the former world champion Allessander Lenzi, who in 2005 invited Lee to train with him in Brazil for several months in preparation for that year’s IJSBA Amateur Freestyle World Championship. The training ultimately paid off because Lee became the youngest person in history to win the competition that year.

What’s more, the following day the amateur Lee was given permission to compete alongside the pros at the IJSBA Professional Freestyle World Championship, where he secured a highly respectable fifth place finish. The experience confirmed to Lee that he was not out of place at that level. Becoming professional world champion would be his next target.

In 2010, Lee finally reached his goal; successfully executing the first ever ‘flat water Superman backflip’ during competition. Just like his first amateur title, moreover, he became the youngest person in history to be crowned champ.

Since then, Lee has overcome many setbacks to reclaim the professional world title six more times, with the latest one being secured in 2019. “In that competition, I became the first person ever to perform a ‘double barrel roll’. Along with the ‘double backflip’ which I successfully performed in 2017, this has certainly been one of the highlights of my career to date,” he says.

Just like fellow NGK SPARK PLUG brand ambassador Luc Ackermann, Lee’s sporting hero is Travis Pastrana, the American motocross legend. “He was the first person in the world to perform a ‘double backflip’ on an MX bike and ever since seeing that, I made it my mission to perform the same stunt on a watercraft,” he informs.

A desire to execute record-setting stunts, however, isn’t the only thing the two daredevils have in common, with Pastrana once remarking that “I don't remember most of the injuries, there have been too many.” The same, unfortunately, is applicable to Lee, who has required numerous surgeries for shoulder and knee dislocations as well as for many broken bones.

Nevertheless, the extreme nature of the sport has never weakened his desire to continue to push new boundaries. Experience, however, has taught him to be smarter during preparation. “During training, I’ve definitely learned to preserve my body better. But when it comes to competing, all of those things go out the window and I ride like I’ve never done before,” he insists. 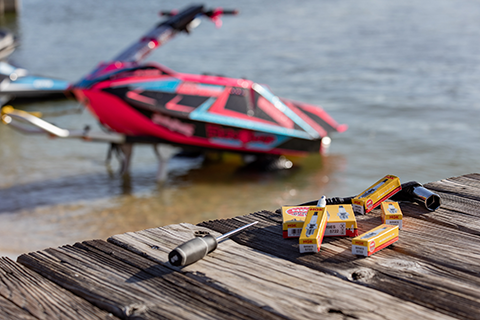 The downtime he’s experienced due to injury has provided many benefits for Lee. This includes further developing his very own brand of watercraft: ‘Revolver’. He first showcased the vehicle at the 2012 Professional World Championship, securing second place on the podium. Directly after the tournament, orders for his ‘Revolver’ unsurprisingly skyrocketed.

“In order to be able to perform new types of tricks, I recognised that the equipment needed to be redesigned in more innovative ways, which is why I set out creating my own design,” he reveals. “The company started as just an idea with only me working on the design and concept. Today, however, the company has a large premises which is expanding every year in terms of size and staff and is now recognised as one of the world’s leading manufacturers in the industry.”

When competing aboard his custom-built ‘Revolver’, Lee relies on the spark plugs from the world’s leading ignition and sensor specialist. “I use the Yellow Box Line reference BR7ES which provides outstanding performance and reliability. As the world’s leading freestyle jet skier, I require the world’s leading products to achieve success, so I couldn’t think of a better company to collaborate with than NGK SPARK PLUG.”

While the global pandemic significantly impacted competition in 2020, Lee put the time to good use by focusing on his business interests as well as setting new goals to achieve when things finally resume. “I’m very fortunate that I was able to continue to train during the lockdown period, so I was able to stay in competitive shape,” he tells.

With many years of competition still hopefully ahead of him, Lee is currently driven by the goal of winning 10 world titles. “I started competing at ten and I currently have eight (amateur and professional) IJSBA World Championship titles, so my focus now is to keep chasing down that number ten.”