It was exciting news last December when NGK SPARK PLUG announced its partnership with the X-raid cross-country motorsport team in this year’s legendary Dakar Rally. Not just another milestone in a rich racing history, it also provides an invaluable testing ground for high performance ignition technology in what is regarded as the world’s most formidable motorsports endurance event.

When X-raid’s three, NGK SPARK PLUG-sponsored car teams put in remarkable performances in the 8,375km, 12-stage Dakar Rally across the spectacular terrains of Saudi Arabia from 1-14 January 2022, X-raid´s navigator Timo Gottschalk, one of the sport’s most respected co-pilots, delivered an insight into the race.

But the skills and endurance of these drivers and co-pilots are only part of the story. Their cars, engines and of course their ignition systems are also put to the ultimate test. This is where X-raid excels, having developed and built off-road vehicles for competition at their site in Trebur near Frankfurt, Germany since 2002. Indeed, Przygoński and Gottschalk’s diesel-fuelled MINI JCW Buggy was built by X-raid under the MINI brand – a model similar to those that previously won X-raid the 2019 FIA World Cup for Cross-Country Rallies as well as the 2020 and 2021 Dakar Rallies. Overall to date, X-raid has scooped 14 World Cup titles and won the Dakar Rally car category six times. 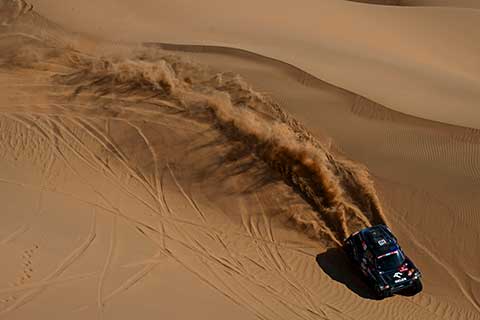 Backed by that X-raid heritage and with 27 years’ co-driver experience, it’s no surprise then that Timo Gottschalk is one the best off-road navigators in the business. He is also no stranger to the demands of Dakar, having made his debut there in 2007 and winning it in 2011. His move to X-raid in 2018 was specifically for the Dakar Rally. He recalls: “I came to X-raid through [Saudi Arabian rally driver] Yazeed Al-Rajhi. I was his co-driver and we competed in the Dakar in a MINI. Later I switched to Kuba Przygoński in the cockpit.”

The duo have tackled the Dakar Rally together ever since – including the 2021 and 2022 events which, thanks to their timing and location, did not face cancellation due to the Covid-19 pandemic. Other off-road rallies were not so lucky. Timo acknowledges both the disruption caused, and how the sport responded. “When the pandemic started, many rallies were postponed or cancelled,” confirms Timo. “The season was difficult to plan, but that improved last year. All organisers found ways to hold the rallies, including preparing appropriate hygiene concepts. That has worked well so far.”

Nonetheless, the experienced pairing of Przygoński and Gottschalk successfully completed the gruelling Dakar course in only 40 hours 26 minutes – just two hours behind the winning car and five times faster than some rivals.

Their feat is all the more impressive when you consider the extreme conditions involved. Taking place entirely within Saudi Arabia’s borders due to Covid-19 travel restrictions, this year’s Rally took a difficult route from Ha'il to Jeddah, encountering vast chains of sand dunes around Riyadh, as well as the deserts to the south of Saudi Arabia known as the Empty Quarter. Add to this that each stage route is only revealed to teams 15 minutes beforehand, and that GPS, radios and smartphones are banned, and the importance of the co-pilot becomes clear!

Instead, rally raid navigators receive only a ‘road book’ for each stage. This is used, with a digital odometer, to measure precise distances and instruct their drivers on every direction, twist and turn to take. Every moment counts, with no room for error. It’s an extraordinarily intense job that takes not only navigation expertise, but also a strong bond between teammates, crystal clear communication and a cool head under stress. Inevitably, extensive preparation is key, as Timo makes clear: “We try to compete in different rallies during the year. Last season we competed in three events and this year we want to do the Rally Raid World Championship,” he says.

Yet, whilst Timo’s navigation skills certainly match the endless sands of Saudi Arabia, it’s not his favourite terrain. “Saudi Arabia is a great country and offers many opportunities for the Dakar. There are many different deserts here. But just desert,” he confesses. “If I remember South America, there was much more green and more variety of terrain. From my point of view, that was more interesting.” 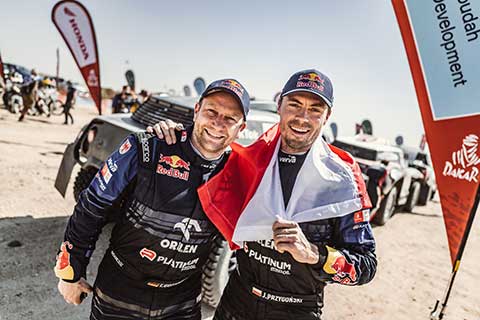 For would-be drivers and co-pilots looking to get into the sport, the seasoned navigator has some practical tips. “If you want to get into cross-country sport with a vehicle, you should start with the side-by-sides as these are still quite inexpensive,” he advises. “Even in the short Baja events, you can already learn a lot without it becoming too expensive. Either way, you need a dedicated co-driver. From there, you can work your way up!”

Looking back at his own career, however, it is not Timo’s 2011 Dakar triumph that is his proudest moment, but a Russian win in 2018. “My highlight was winning the Silk Way Rally, which I drove together with Yazeed,” he reveals. Nonetheless Timo tells us he is keen to compete again in the 2023 Dakar Rally, which once again is set to be held in the Middle East.

We at NGK SPARK PLUG wish the entire X-raid team every success, and many more podium places to come!