Throughout the past 12 months, our ‘road trip’ blog series has featured a variety of voyages undertaken by NGK SPARK PLUG employees. Touching on many iconic routes in both Europe and Africa, the blog series was widely read and enjoyed, and offered a small glimpse into the lives and passions of some of the individuals that provide the backbone to the world’s leading ignition and sensor specialist. Join us for our fifth and final instalment of our road trip series, which depicts a journey to a destination that many describe as the ‘best driving road in the world’.

Like many car enthusiasts, Sarah Weilbier, Specialist Online Communication NGK SPARK PLUG EUROPE, is a big fan of the BBC TV series ‘Top Gear’. On one particular episode of the show, its three presenters began ‘the search for driving heaven’, a task to find the best road in the world to drive on. Ultimately, they chose Stelvio Pass, an Alpine mountain pass in northern Italy, featuring 48 famous hairpin turns which pave a descending route from the top to the bottom of the valley.

For Sarah, the Top Gear recommendation was enough for her to decide to do her very own version of the route in August 2021. Aboard a Volkswagen Golf 7 TSI ignited by NGK spark plugs, she and her partner (also a huge car enthusiast) set out from Düsseldorf, Germany to make the 570km trip to her first pitstop in Constance, a university city with 83,000 inhabitants located in the southern German state of Baden-Wuerttemberg. “There are many things to do in this beautiful city, so we decided to stay for two days,” says Sarah. “These include visiting Lake Constance which is the third largest freshwater lake in Central and Western Europe, as well as being home to three Alpine prehistoric pile dwellings which are designated UNESCO World Heritage Sites.” 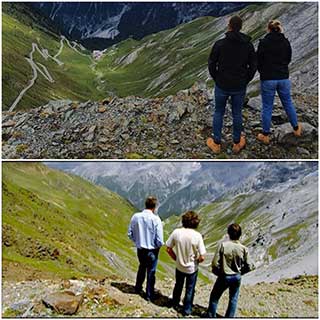 With Constance satisfactorily explored, they embarked on the next leg of their trip which was destined for Vaduz, Liechtenstein. The country’s capital is located on the River Rhine and is one of the smallest capital cities in the world with a population of 5,696 residents. “Notable landmarks include Vaduz Castle, which overlooks the city and the Cathedral of St. Florin,” says Sarah. “We, however, only stayed one night there because we had bigger destinations to encounter further down the road.”

The next day, the pair departed for Bormio with the goal of completing Stelvio Pass. Along the 165km route, however, there was a little surprise in store in the form of Umbrail Pass. At 2,501m above sea level, Umbrail Pass is the highest paved road in Switzerland. “This part of the trip was incredibly exciting,” says Sarah. “Umbrail Pass is more or less a single lane that is steep, unlit and unsecured. I wasn’t prepared to have to master such a stage before reaching the ultimate destination, and given the spontaneity of it all, it ended up being the most nerve-wracking part of the whole trip. Thrilling!” she says.

Finally, after around 850km covered, the couple reached Stelvio Pass. A mecca for motoring enthusiasts, which also has inspired both Alfa Romeo and Moto Guzzi to christen vehicles in its honour, the mountain pass certainly lived up to all of Sarah’s expectations. At an elevation of 2,757m above sea level, Stelvio Pass is the second-highest paved mountain in the Alps.

“The view was simply stunning,” says Sarah. “There were mountains all around, and despite the fact that it was early August, they were all covered in snow! In fact, it is not only a hotspot for motorcycle and sports car drivers, it also attracts many skiers too. Indeed, I witnessed many people boarding cable cars in skiing gear to ascend Mount Ortler, a mountain directly opposite Stelvio Pass which features glaciers,” she tells.

Stelvio Pass is also of historical importance, as it once formed a border between the Italian Kingdom and the Austro-Hungarian Empire, with many battles fought in the snow and ice during World War I. “We stayed in a hotel built at an elevation of 2,758m which was a 100m walk to the ‘Dreisprachenspitze’ (‘the peak of the three languages’) which, before World War I, was the international tripoint of the Kingdom of Italy, the Austro-Hungarian Empire and Switzerland,” says Sarah. 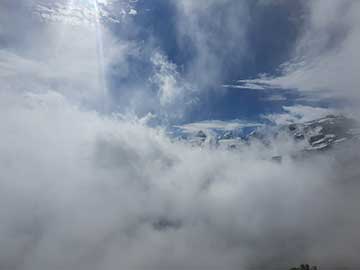 On departure day, a dense fog had descended upon Stelvio Pass. “We drove down the route’s famous 48 hairpin bends, which measured approximately 1,500m. It took us about 30 minutes, which due to the thick fog, felt as if we were floating on the clouds,” she says.

With the goal completed, Sarah began the voyage back to Düsseldorf, but not before a visit to Bad Hindelang in Bavaria for some rest and relaxation as well as a hike up part of Iseler, a mountain with an elevation of 1,876m. “The whole trip was an extraordinary journey in the heights,” she concludes. “So far, Stelvio Pass has been the most thrilling driving road for me! I’m certainly up for similar adventures sometime in the near future.”