One of the main reasons why NGK SPARK PLUG is the world’s leading ignition and sensor specialist is because it is comprised of dedicated employees who have one thing in common: a burning passion for all things automotive. And what demonstrates this passion more than taking a vehicle out on a road trip to explore new destinations! This is why we are excited to launch a new blog series, which focuses on the unique road trips that have been undertaken by our employees in the EMEA region. These are their stories!

While many sectors of the global economy have suffered greatly from Covid-19, few have had it as bad as the tourism and hospitality industry. For Mike Venlet, Regional Sales Manager at NGK SPARK PLUG South Africa, being confined to within the borders of the ‘Rainbow Nation’ closed many travel possibilities. However, when he discovered that the pandemic was taking a financial toll on an iconic roadside bar on the country’s famous Route 62, a different type of travel opportunity presented itself.

“I saw a post on Facebook from ‘Ronnie’s Sex Shop’ which revealed that the business was in danger of having to permanently close down due to the harsh lockdown”, he tells. Not as kinky as it initially sounds, the name of the bar is the result of a prank played on its owner Ronnie, who one day arrived at the premises of his struggling farm stall to discover that the sign for ‘Ronnie’s Shop’ had been both slightly and significantly modified!

The altered wall sign, however, started to attract visitors, keen to take a picture in front of the budding tourist attraction. Opportunity, indeed, had knocked, so Ronnie decided to convert his farm stall into a pub and the rest as they say is history; the establishment quickly becoming a popular pit stop for bikers, travellers and tourists alike.

With the bar in financial danger, the time indeed was ripe for Mike to finally make a pilgrimage there. “I thought that with all South Africans bound to our own country, it was the perfect opportunity for me to explore my native land. What’s more, a road trip would help to support the local businesses along the way,” he says. 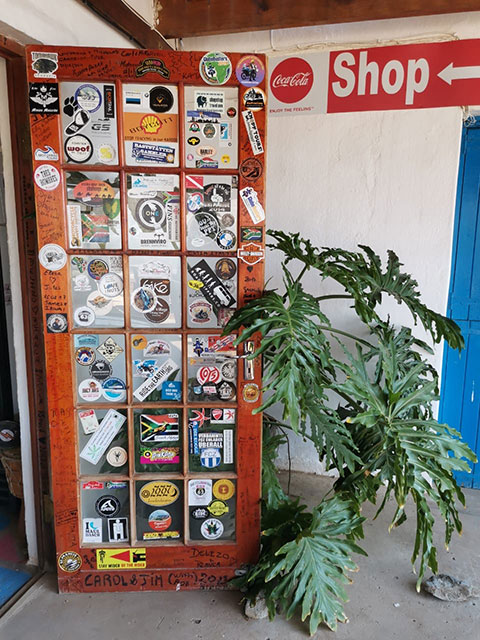 Aboard a Volkswagen Golf 7 R-Line, one of South Africa’s most popular cars which in addition, was equipped with the Laser Iridium reference PLFER7A8EG to ensure high-quality performance, the journey commenced early one Saturday morning in Blouberg, Cape Town. Alongside him was his girlfriend of two years, Kim. “It was a great opportunity to escape the rat race and enjoy a scenic drive with my best friend,” he tells. “We are very similar in ways. We both come from motorsport enthusiast families and driving is a big part of our R&R.”

Along the 600km round day trip which would venture as far as Barrydale before turning back towards home, South Africa’s aesthetic beauty was there for all to see. This included “selfie-musts'' at idyllic places such as ‘Sir Lowry’s Pass’, ‘Suurbrak Pass’ and ‘Tradouw Pass’.

Other standouts included the Oude Post Bistro, which “is famous for its roosterkoek (a South African bread)” and Monkey Town in Somerset West. “This Wildlife Centre hosts over 250 primates and 26 different exotic monkeys and apes. It was in desperate need of business due to Covid-19, so we were happy to help out,” he says.

After close to 300km of travel, they finally reached Barrydale. One of the many unique towns along the famous Route 62, Barrydale has “great farm stalls, awesome restaurants and excellent brandy”. While there, the couple made a short pit stop for a milkshake at a vintage diner and motel called ‘Diesel & Crème’ but with time of the essence, they began the long road home. There were still, however, a few boxes to tick off.

Chief among these was a certain roadside bar with a very misleading name and when the pair finally got there, they were not disappointed. “The highlight of the trip was certainly the stop at ‘Ronnie’s Sex Shop’,” he reveals. “Kim and I had long wanted to visit this iconic spot. It was a great pleasure to be able to spend an afternoon speaking to Ronnie, he is an encaptivating storyteller.”

After leaving Ronnie’s, the penultimate stop was the picturesque town of Montague, famous for its “awe-inspiring rock formations, orchards, vineyards and healing springs”. Then, finally on to the last destination before reaching home: Avalon Springs. Another famous tourist hot spot, “Avalon Springs features outdoor naturally hot mineral springs where guests can relax and recharge, soaking up the healing powers of the hot pools,” he tells. 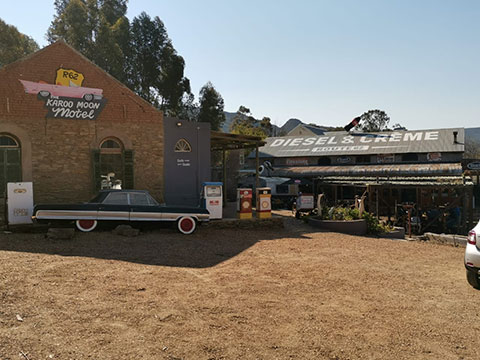 Using Google Maps, the planning of the trip was a simple procedure. The carrying out of it, however, was anything but. “We planned to complete the trip in a single day, and this proved to be incredibly challenging. The route was absolutely stunning but unfortunately, we had no time to stop at so many of the places we passed, as we had a strict schedule to adhere to,” he informs.

Giving oneself enough time to truly experience each destination is the main piece of advice he would disseminate. “One day for this trip is not enough,” he says, adding that he “would recommend going with family or friends because this is a trip that creates special memories.” A camera too, is essential equipment “the views are breathtaking.”

The trip, however, was not a once in a lifetime venture. On the contrary, it has only made Mike and Kim hungry for more. “I would like to think of this trip as a ‘starter’. We plan to complete another one, only this time we will extend the route and include Oudtschoorn which is famous for the Cango caves,” he reveals. This time, though, they will make sure that they can savour every last inch of the journey. “The lesson has been learned: the next trip will have ample time built in so that we are able to enjoy all of the attractions on the route.”