For the second instalment of our road trip blog series, we travel to Italy to meet two NGK SPARK PLUG fans. Thanks to the sponsorship they received from the world’s leading ignition and sensor specialist, they were able to complete a colossal trip around their native country aboard two vintage Vespas, which created memories to last a lifetime.

It is often said that ‘you don’t know what you have until it’s gone.’ For Italian NGK SPARK PLUG fans Daniele Bove and Simone Perano, this was certainly the case when the Covid-19 pandemic first brought Italy to a standstill.

With their movement highly restricted, their desire to take their vintage Vespas out on the road and go exploring heightened. This is where the idea of an epic pan-Italy road trip emerged. “The idea was born during quarantine,” confirms Simone. “We needed to escape after months in the house. Having already undertaken a road trip to Rome, this seemed to us to be the perfect opportunity to travel further south on our vintage Vespas once the lockdown had lifted.”

Friends for over 15 years, the two Vespa riders wanted to ‘touch’ all of the mainland regions of Italy. The specifics of the journey, however, would remain vague even after they got underway. “We started with a ‘generic’ itinerary in mind, with certain must-see destinations included, but nothing more,” Simone tells.

Indeed, spontaneity would be one of the major themes of the whole voyage. “During the journey, we decided our route based on the weather and our mood, with Daniele navigating. In fact, he did this with the Google Maps app on his phone, which he kept in his right pocket for the whole trip!” he reveals. 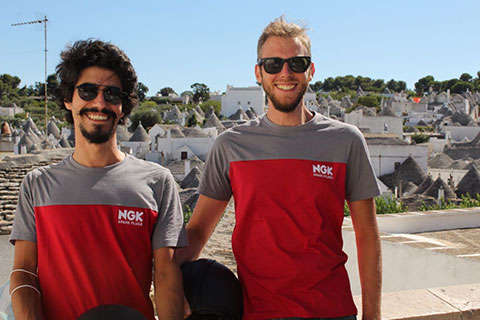 Born and raised in Turin, the two friends departed their native city in late August aboard a PX125 Vespa (1982) and a Vespa Special (1977), which were both equipped with the NGK spark plug references B6HS and B7HS.

“Our first stop was in Venice, one of the most iconic cities in Italy,” Daniele says. “There we visited Piazza San Marco, as well as naturally taking a nice gondola ride through the city’s famous canals.” With much ground to cover, they couldn’t stay for long and were soon back on the road again, travelling the 155km to Bologna, which was followed up by a 231km trip to Ancona. From there, they rode along the picturesque Adriatic coast before completing a giant 620km journey to Apulia, close to Italy’s ‘heel’.

“There, we visited two of the region’s most popular destinations: Alberobello which is famous for its ‘Trulli’; traditional Apulian dry stone hut-houses featuring conical roofs, and Polignano a Mare, an authentic pearl of the Adriatic Sea,” says Simone.

After the sea and sun of Apulia, the pair travelled the relatively short distance to Matera, a culturally rich city in the Basilicata region, which was elected European Capital of Culture in 2019. “Matera is especially famous for the ‘Sassi di Matera’, which are equally spectacular and complex cave dwellings carved into the ancient river canyon of the city,” Daniele says.

On a Homeric-like voyage such as Daniele and Simone’s, however, it would be very unusual not to experience any setbacks. “In the coastal town of Policoro, my Vespa began experiencing engine problems,” Daniele reveals. They stayed there for a few days but even with the help of a local mechanic, they were unable to rectify the problem so the two decided to push on with the trip.

This however, proved to be a risky decision. “Between Policoro and Salerno, we travelled at an average speed of 45km per hour but were plagued by constant breakdowns. Luckily in Battipaglia which is 25km from Salerno, we were rescued by a very generous mechanic who also happened to be the president of the local Vespa Club,” he tells. 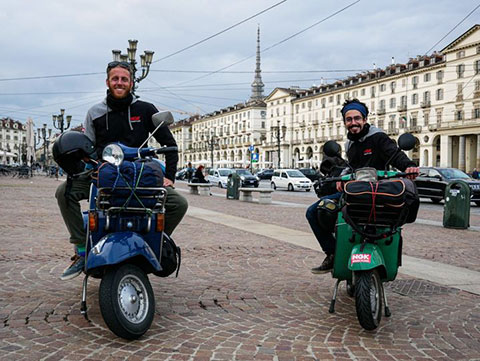 All roads lead to Rome

After Salerno, they travelled to Campania where they experienced some rather scary traffic, before moving on to Naples where they stopped briefly for pizza and to take some photos of the famous Piazza Plebiscito. 217km on, they reached a destination in need of no introduction: the eternal city of Rome. At Italy’s capital city, they did the obvious and visited the world’s most famous ancient gladiator arena, the Colosseum.

With home within their sight, they decided to take a detour so that they could tick off one more famous destination: Florence, the cradle of the Italian Renaissance. Finally, after more than 5.000km and 44 days, the pair arrived back home in Turin, having completed an adventure which they will remember for the rest of their lives. “It’s impossible to pick out a highlight because there were so many throughout the entire journey,” says Simone. “We saw many big cities for the first time and discovered many more which fascinated us in surprising ways.”

For those considering a similar type of trip, Simone advises “not wasting too much time planning the trip. Be brave and go! Also, you will need far less stuff that you think, so travel light.”

The whole experience has made both Daniele and Simone hungry for more adventure and another Vespa trip is certainly a possibility. “The desire is certainly to do something similar but with different destinations,” says Daniele.

But whatever the future holds, the two pair will always have their 2020 trip to look back upon which is why they are grateful for the sponsorship they received. “We would like to thank NGK SPARK PLUG for believing in our project right from the start, supporting us during the journey and providing us with their spark plugs. Their support allowed us to make our dreams come true.”