Ice Speedway riders have often been described as both the bravest and craziest of all motorcycle riders. If you see how sharp the tyre spikes are — which are also close 3 centimetres long — it’s easy to understand why.

Of all these brave men, 33-year old Russian rider Daniil Ivanov stands out. The three-time and current world champion, who began riding a motorbike at the age of seven — trained by his father, a well-known rider himself — has ice in his veins. “You have to go to the start with a cold head and only think about the race. There is no time for fear”, he coolly reveals. To add to his growing profile, Daniil has just signed a sponsorship deal with NGK SPARK PLUG, the long-standing supporter of traditional Speedway who, more recently, has decided to venture into the frostier version of the sport.

No time for fear

Ice Speedway runs on the same rules as Speedway, which sees riders compete on 500cc custom-made motorcycles without brakes. Just as in Speedway, riders race counter clockwise around oval tracks between 260 and 425 metres in length. In order to win the world championship, they have to hold their nerves and prove their skills in 24 so-called "heats". A “heat” consists of four laps and lasts only 60 seconds overall.

Riders in Ice Speedway compete in two categories, either on full-rubber or studded tyres. The studded tyre category involves competitors riding on motorbikes with around 300 spikes of up to 28 millimetres in length screwed into both treadless tyres. Every rider must have complete trust in his tyres, which is why Daniil takes care of his ones personally: “I hand-craft the wheels with spikes myself. I use a Barum tyre on the rear wheel which is of a very old production. It was discontinued in the 1980s.”

“I’m not slowing down”

In the studded tyre class, there is a tremendous amount of traction produced by the spikes digging into the ice, which means that riders lean their motorcycle into the bends at an angle where the handlebars just skim the track surface.

But how do you slow down without brakes? “We close the gas before turning”, says Daniil, whose motto, funnily enough, is “I’m not slowing down”.

After years of competing in motocross, Daniil’s first Speedway racing season was in 2002, when he was just 17 years old. This was soon followed by a number of national, European and World titles, including the 2009 Team Ice Racing World Championship. His biggest break, however, came in 2013 when he raced his way to victory in both the individual and team Ice Speedway World Championships, which he repeated the following year, making it back-to-back world titles for the Russian racer. 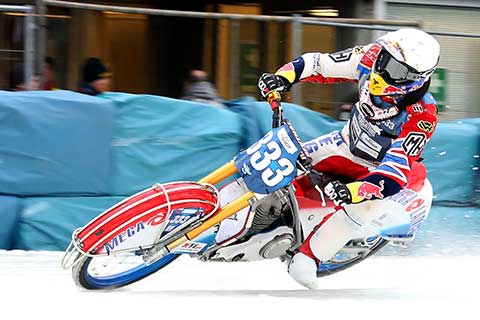 When asked about the most exciting thing about his sport, he says: “Adrenalin, speed, and to fight for each point in every heat!”

Daniil’s Ice Speedway motorcycle is custom-made and totally different from the ones used in Speedway, he tells us: “It’s made of parts from all over Europe and developed by my team. I use a Dutch frame and Swedish shock absorbers, a Czech “Jawa” engine, two gearboxes and, of course, spark plugs from NGK.”

The 2020 FIM Ice Speedway World Championship will be kicked off with qualifying rounds in January in Sweden and Finland, followed by the official championship races in February in Kazakhstan, Russia, Germany and The Netherlands.

In 2016, the world champion spectacularly circled the frozen Lake Baikal on his motorbike – the deepest and oldest lake in the world. When asked about his favourite racecourse, the world champion says: “On Russian tracks, we drive several times a year, and on European tracks only once. In Russia, there’s natural ice, in Europe it’s artificial. Therefore, there are other speeds and settings. I know all the tracks very well and there is no favourite.” No matter where: “My goal is the same every year: Only first places in competitions!”

We at NGK SPARK PLUG keep our fingers crossed and wish Daniil best of luck in the upcoming season! As long as there is adrenaline, studs and methanol, we’re pretty optimistic.