Born to jump! How Luc Ackermann conquered the world of freestyle Motocross

Meet Luc Ackermann, the 23-year-old freestyle motocross rider whose record-breaking success over the past decade has seen him being described as ‘the German Evel Knieval’. We caught up with the young NGK SPARK PLUG brand ambassador to discover a little more about his intriguing life and career.

Despite his young age, Luc is a veteran when it comes to riding a motorcycle, with almost two decades of experience. “I was three and a half when I first sat on a pit bike, so I grew up with it,” he tells. It was the influence of his older brother Hannes, however, which led him down his current path. When Hannes took up the freestyle motocross in the early 2000s, Luc’s passion was suddenly awoken. “When you leave the ramp, you are flying for a couple of seconds. This short time is a feeling of freedom,” he enthuses.

Only a few years later in 2010, a 12-year-old Luc would announce himself as one of the biggest prospects in the sport by becoming the youngest person ever to execute a backflip on a motorcycle. He followed this up by entering the Guinness Book of Records in 2013 by performing a backflip along with 17 other FMX riders in London.

The drive to continually break new ground never diminished, as was demonstrated in 2017 when he became the youngest person in history to perform a double backflip on a motorcycle. He then proved to the world that this had been no fluke when in 2018, he became the first athlete to carry out this exact stunt during competition at the FIM World Cup. That same year, he was also part of a three-man team (along with Josh Sheehan and Jackson Strong) which accomplished the first ever three-person double backflip train.

At the end of the decade, he achieved another career highlight by becoming the youngest person ever to win the 2019 FIM Freestyle Motocross World Championship. To top things off, he then performed a world record-breaking ten backflips in under 30 seconds in 2020; surpassing his idol Travis Pastrana’s 12-year-old record by two backflips in the process.

Pushing it to the limit!

Increasing in global popularity, the world of freestyle motocross is also becoming more demanding for its competitors. This is demonstrated by the continual addition of new ramps, which are opening up a wider variety of stunt possibilities that nobody envisioned even a few short years ago.

“The sport has developed so fast in the last few years,” Luc confirms. “You have to push yourself to the limit every time if you want to reach the top. To be able to compete in the biggest contests, you have to be able to do double flips, 540s, body varials, 360s and hard backflip combos.”

To perform at this level, Luc adheres to a strict training and fitness regimen. “I go jogging, ride bicycles, go to the gym and of course jumping for up to five hours every day on a 100kg motorbike keeps you in good shape,” he tells. Being physically fit, however, not only helps increase performance, it is also vital in protecting oneself against injury. Afterall, freestyle motocross has the potential to be a very dangerous sport. “You have to have strong muscles in this sport because they provide an added safeguard if you crash,” he says. 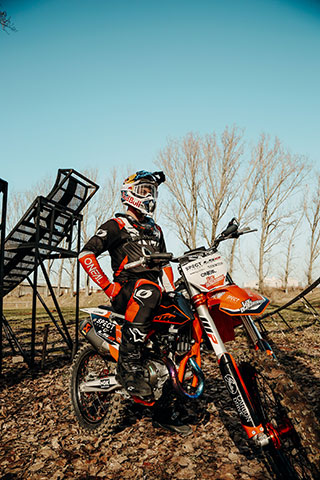 Getting back on the saddle

The Covid-19 global pandemic impacted pretty much the whole world and the sport of freestyle motocross was no different. “We’ve had no contests or shows anywhere in the world since March 2020. I would have been travelling around the world for the whole year if it hadn’t occurred,” Luc reveals.

Despite the setback, he was still able to set the aforementioned world record of ten backflips in under 30 seconds as well as get a lot of practice in. “Our FMX compound is only 500 metres away from our home and my brother and I were able to get permission from the mayor of our city for its sole use. So, luckily, we were able to practice throughout the whole lockdown,” he tells.

Still, Luc is yearning for a return to normal competition and is still optimistic about the prospects for 2021. “I hope contests and shows are possible from the summer on, and that we can have arena events again in the autumn,” he says.

For anybody wishing to get involved in freestyle motocross, Luc emphasises focussing on the basics first. “First, you have to get bike skills,” he says. “Doing rounds on a motocross track helps a lot, especially when it has small jumps on it. You should start with a pit bike hitting a ramp that is placed really close to the landing hill. These should be the first steps.”

Of utmost importance for Luc is having a motorcycle that guarantees optimum performance, which is why he relies on spark plugs from the world’s leading ignition and sensor specialist. “I use Laser Iridium spark plugs for my KTM 450 SX-F,” he reveals. “NGK SPARK PLUG has the best products and is one of the leading companies in the world. They are supporting a lot of motorsports and athletes, so we fit together perfectly,” he says.

Although he would one day consider a switch to rally racing due to his love of driving fast cars, Luc’s immediate plans concern further conquering the world of freestyle motocross. “I want to defend my FMX World Championship title as well as win a medal at the X Games and be on the podium at the Red Bull X-Fighters,” he tells. Considering all that he has already achieved; it would be very foolish to bet against him!

NGK SPARK PLUG wishes Luc Ackermann all the best in the upcoming 2021 season.