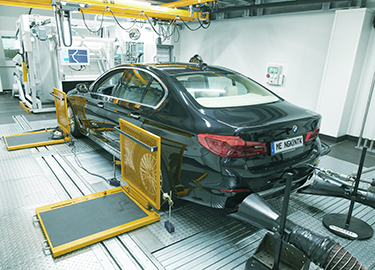 My Life on the Race Track

The NGK Racing interview: George Richardson - my life on the race track and why I dream of Le Mans

NGK SPARK PLUG supports motorsport teams and drivers on the race track, off-road and on the water. Without the passion of the people in the motorsport ‘family’, vehicles and engines wouldn’t have developed as quickly as they have in recent decades. Here we chat to young British endurance sports car racing driver and NGK brand ambassador George Richardson about how he fell in love with motor racing, the people who back him up and his love of Le Mans.

George Richardson certainly has a good sense of humour. “Of course – I’m from England!” he smiles, when asked whether he likes driving in wet weather. With his reddish-blonde hair, freckles and slim but athletic build, the GT race driver and NGK SPARK PLUG’s brand ambassador (who recently signed another one-year-contract with NGK) looks younger than his 26 years. We’re meeting George on the race track. He is running a McLaren GT4 test training session in the Dutch town of Zandvoort. The muffled engine roar might belong to one of the most exciting GT vehicles, but today’s interview is more about George as a person. ‘G dot’, as he’s nicknamed, has sacrificed his lunch break for us. Track time is expensive, and he’s keen not to keep his colleagues waiting. ""As a driver, I’m part of a team that relies totally on each other,” says Richardson. “Without the shared spirit, that ‘we-feeling’, you’ll fail in racing. Mine includes the mechanics on-site, my long-time manager, my father, who introduced me to racing, and of course the partners who invest in my career."" He adds: "Being supported by the right people is extremely important, and that includes sponsors such as NGK. I’ve lost races in the past due to parts failures. It’s essential to be able to completely rely on key engine components such as the spark plug.”

George says he’s always been passionate about motor racing. The spark was lit by his father, who gave him a mini motocross bike for his sixth birthday. Young George soon became known for pushing the limits in a dangerous sport. "In the end my parents gave me the choice: if I wanted to continue competing in motorsport, then I’d have to change from two wheels to four because of the lower risk of injuries. As it turned out, the kart class gave me the same buzz as motocross."" But the young spitfire initially found it hard to keep his cool. "As an industry we spend millions on developing the racing cars, but the most variable element is the driver. Mental strength and stress resistance are the most important characteristics of a good racing driver. Body and reflexes are easier to train than your brain. When you get into the first corner - with 30 or 40 vehicles, and everyone else as ambitious as you are - mental strength makes all the difference. That’s why the most important workout outside the circuit is psychological training.”

Since learning that lesson, George’s achievements have included third position in the Porsche Carrera Cup Pro-am 2 at only 19, being the youngest British driver to podium at the Indianapolis Brickyard, racing Ferrari 458s in two European Le Mans series for JMW, winning the 2016 NGK Masters drivers title, competing in the VLN endurance championship and taking second place in the Dubai 24 hours Cup 1 class. But his biggest dream is to win the Le Mans 24 Hours. “Le Mans is the ultimate career goal for me,” confirms Richardson. “Although I won’t be racing in it this year, it’s on my wish list. I’ve got my eye on the prize!” Does passion for the sport get lost at professional level, we ask? He laughs: "For me as a racing driver the challenge isn’t a lack of passion, but too much of it. I’m quite a bad loser, and after defeats I find it hard to get away from it all. That’s probably the case for most of my colleagues too."

Talking about the partnership with the ignition and sensor specialist, he confirms: “In motorsport, if the engine performance isn’t right, you can drive your very best but you’ve got no chance. NGK SPARK PLUG has been equipping motorsports vehicles for decades - motorcycles, karts, GT vehicles up to Formula 1, even power boats. That’s a great trust-builder for me. “ The team manager is looking anxious. Richardson checks his watch. "Mind you, the best technology is pointless if the driver isn’t in the car on time!"" he smiles, with that typically British humour.

Your car, your story – Part 1 The Audi 90: A rare modern classic

Oxygen sensors: The easy to install devices that are vital to motorcycling performance - March 2020